Thirty-three years ago today, my son Tyler was born. My students at Alarka Elementary were giving me a baby shower when I realized he was on his way. Tyler wasn’t due for another two weeks, but he and God had different plans. Emily Harris was the school nurse, and she told me that I was, in fact, in labor. Shirley Loftis began timing my contractions and whispering ‘Jesus’ after each one:) I continued to party with my students and ignored the worried looks from my colleagues.

I learned an important lesson in cockiness that day as I told those around me that the pains were barely noticeable. I was sure it was going to be an easy delivery. Around ten o’clock, Mrs. Harris was told me that I needed to get to the hospital. Shirley told me the contractions were coming every five minutes, so I went to tell Mr. White that I needed to leave. He agreed wholeheartedly and urged me to leave immediately. Lawana Almond took me to my doctor’s office, and the wait began.

Dr. Han was calm and said he wanted to keep me at his office as long as possible. At noon, my water broke, so we all went to the hospital. My contractions were one minute apart and very intense. I knew it would be over soon and just kept on breathing. Billy and I had gone through Lamaze classes, so we knew the drill and prepared to get this baby into the world. He told me when the contractions were coming, and I did the breathing exercises as prescribed. I also learned a powerful lesson in knowing what to do and actually doing it which always applies beautifully to walking in God’s kingdom:)

Tyler was a big, strong baby who weighed an ounce shy of nine pounds. He was anxious to get here, so he pushed up and over the birth canal. His was out of position and struggled to no avail to get free. Dr. Han reached in and repositioned him just as God repositions me when I get ahead of myself:) At eight o’clock, Dr. Han convinced me to have an epidural for the pain, and at 10:10 pm on Friday, April 18, 1980, Tyler Proctor joined my journey. He was screaming loudly but stopped immediately when he heard my voice. It was humbling to watch his little eyes try to focus as he looked toward me, and I think of that moment when I know God is there but have trouble seeing Him. I am reassured by His voice and His presence as Tyler was with mine. Dr. Han placed Tyler on my stomach, and he stared and listened intently. Again, I think of God when I recall that moment because it is when I began to understand His love for me. I was taking part in God’s creation, and He used my precious son to take love to a new level.

I thank God every day for my sweet son and the girls he loves so dearly. I share my journey with his daughters in mind, so it’s important to let them know how their daddy came into this world. Last night, as I watched him and Gina playing and squealing with the little girls they both adore, my heart just melted. Mama told me once there was nothing better than a grandchild. I told her there was no way I could love anyone more than Tyler, but she grinned and told me to just wait. She was right, as usual, and I love Lillyann and Mylah more than I thought possible. My love for Tyler grows as I watch him love his beautiful girls and watch them love him right back. Gina is a daughter to me; I love her dearly and refer to her as my daughter-in-love. They surround me with love and have taught me that love shared is love squared:) 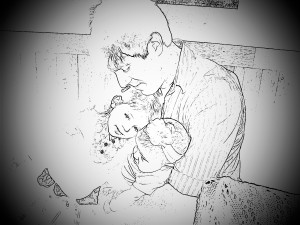