John 8 shows how Jesus dealt with a woman’s sin and a crowd’s thirst for blood. The Word of God and the actions of Christ were not, are not, and never will be like those of the world.

“But Jesus went to the Mount of Olives. Early in the morning He came again into the temple, and all the people were coming to Him; and He sat down and began to teach them. The scribes and the Pharisees brought a woman caught in adultery, and having set her in the center of the court, they said to Him, ‘Teacher, this woman has been caught in adultery, in the very act. Now in the Law Moses commanded us to stone such women; what then do You say?’ They were saying this, testing Him, so that they might have grounds for accusing Him. But Jesus stooped down and with His finger wrote on the ground. But when they persisted in asking Him, He straightened up, and said to them, ‘He who is without sin among you, let him be the first to throw a stone at her.’ Again He stooped down and wrote on the ground. When they heard it, they began to go out one by one, beginning with the older ones, and He was left alone, and the woman, where she was, in the center of the court. Straightening up, Jesus said to her, ‘Woman, where are they? Did no one condemn you?’ She said, ‘No one, Lord.’ And Jesus said, ‘I do not condemn you, either. Go. From now on sin no more.’” NASB

I was humbled by the passages God placed in my path this morning. The lessons this week have centered around courtrooms and guilty pleas from my own heart and from the media frenzy that has played out during the trial involving George Zimmerman’s killing of Trevon Martin. The verdict came late last night as I was returning home. I first noticed online and turned on the television to get more details about the terrible case that is the best example of a lose/lose situation I’ve ever seen. There was no good solution to the case, and either verdict was bound to create havoc. I don’t know what will happen as a result to the actions of both men and the decision of one jury, but I know that it has divided, is dividing, and will continue to divide the nation.

The woman in John 8 is clearly guilty, as am I, as are we all. She deserves to be stoned to death according to the law. The Pharisees know that; the people know that; the woman knows that, and Jesus knows that. She was in the very act when caught, and Jesus knew about everything she had ever done. He knows the same about me.

Jesus reminded the crowd, and still does, that everyone is guilty. If He had taken a stone and killed the woman, He would have been within the letter of the law, and He was without sin and could have thrown the stone in good conscience. If He had taken that path, the crowds would have joined the Pharisees in stoning Him to death for claiming to have no sin. The religious authorities didn’t care what loophole killed Him as long as He was out of their way. The mob just wanted to satisfy their own bloodlust.

Jesus surprised the crowd and the woman by His actions. I’m sure they went away mumbling because a mob wants blood, but they didn’t get any that day. Jesus was saving His blood for Passover. The witness of Jesus is a witness of love, forgiveness, mercy, grace, and hope. Jesus stays with the woman rather than leaving with the crowd or going in a different direction. If He had left the scene or looked at her with disappointment or disgust, she may have killed herself out of grief or run to her lover to find comfort in his arms. Jesus loved her and extended forgiveness to her. He did not condemn her because John 3:17 makes it clear that God didn’t send Him to do that.

“For God did not send the Son into the world to judge the world, but that the world might be saved through Him.” NASB

The Christian witness isn’t about condemnation or judgment; it is about love, forgiveness, grace, and hope. Christ is the perfect example to follow when witnessing, and the woman in John 8 is a good example when it comes to sinning. She knew very well the humiliation and guilt that comes with sin, but she also felt the power of love and forgiveness; so do I. She heard Christ’s heart when He told her to go and sin no more. If she was changed by Christ’s precious love, she went in a new direction after her encounter with Jesus. The same is true for me.

Christ didn’t add an “or else” at the end of His request. He didn’t promise to gather the crowd and help them stone her to death if she sinned again. He knew then, knows now, and will always know the struggle sin presents for each of us. He loved the woman and saw more in her than she or the crowd were able to see. He does the same for me and bids me to do the same for others. It is what witness is all about.

I don’t know what the woman in the scriptures did after her encounter with Christ. I don’t know what will happen in the coming days as a result of the Zimmerman trial, but I do know that the world likes a reason to pick up stones. The mob screams revenge and is thirsty for blood. Jesus offers another way.

Photo from the epic miniseries “The Bible” 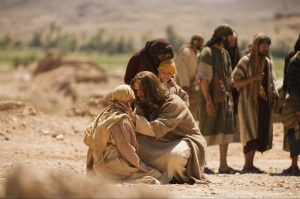