I can’t imagine seeing Christ transfigured with Moses and Elijah standing next to Him. Peter’s desire to build memorials is a natural response to his being taken completely off guard. Jesus understood his fear and appreciated his desire to honor Him, but I’m sure He was also frustrated by his lack of understanding.

Jesus asked the disciples not to say anything about what they saw. I imagine that wasn’t very hard for them to do. They didn’t understand what they saw, so I don’t think they were anxious to explain it to others.

Six days later Jesus took Peter, James, and John, and led them up a high mountain to be alone. As the men watched, Jesus’ appearance was transformed, and his clothes became dazzling white, far whiter than any earthly bleach could ever make them. Then Elijah and Moses appeared and began talking with Jesus.

Peter exclaimed, “Rabbi, it’s wonderful for us to be here! Let’s make three shelters as memorials—one for you, one for Moses, and one for Elijah.” He said this because he didn’t really know what else to say, for they were all terrified.

Then a cloud overshadowed them, and a voice from the cloud said, “This is my dearly loved Son. Listen to him.” Suddenly, when they looked around, Moses and Elijah were gone, and they saw only Jesus with them.

As they went back down the mountain, he told them not to tell anyone what they had seen until the Son of Man had risen from the dead. (Mark 9:2-9 NLT)

I’ve build my share of memorials for God and find myself at a loss for words in His presence, but I cannot imagine seeing what the disciples saw. Jesus had told them of His coming death and asked them not to mention His transfiguration until He had risen from the dead. They remembered His words when He rose, but they forgot them when He was arrested.

It’s easy to get lost in the heat of the moment, and the disciples were lost in the transfiguration and the arrest. My senses fail me, and my heart falters in the face of love. I suppose that will only increase when I see God in heaven, but I will be transformed myself by that time. I ramble when I’m nervous and can relate to Peter. I would probably ask Jesus, Moses, and Elijah if I could get them something to eat or drink.

Words are not necessary in God’s presence. I won’t be stuttering and stumbling over what to say because I won’t have to say a thing. God knows I am like a middle-school girl on Valentine’s Day when it comes to expressing my love for Him, and that only makes Him love me all the more. One day, I will come to the place of no words. Until then, I’ll continue to babble and build.

The little girls have been making Valentine’s  with precious hearts and scribbles on them all week. I treasure each and every one. Those sweet pink sticky notes are like my attempts to tell God how much I love Him. I’m learning that words, gifts, cards, flowers, and chocolates are not as powerful as a warm embrace and sweet “I love you.” Being still and taking in His presence is the best way of all to express my love for Him. I think Peter would say, “Amen!” to that sister! 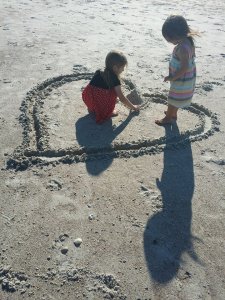